If your data is stuck on an old hard disk drive (SCSI, IDE, PATA, Apple Mac, Firewire) and you would like it transferred off to more modern drives, eg. USB, then give us a call. Also see below links for some typical hard drives we convert files and recover data from.

If your data is locked inside a SCSI drive or SCSI raid array, then we can extract the files and transfer the data to say a modern USB disk, memory stick or CD/DVD disk. The SCSI drives may be 2.5 inch 40pin as used in Mac Powerbook or external 25 pin portable hard drives, or they may be the larger 3.5 inch SCSI disks. These latter disks had a usually had 50 pin, 68 pin or 80 pin (SCA) interfaces. The 40, 50 and 68 pin connectors sometimes suffer pin damage when the cable is forced or bent at an odd angle, but we can repair the interface to recover the data. Data can also be recovered from SCSI raid arrays where the HDD configuration has been lost or become corrupted. 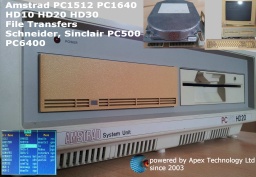 We can recover the data off the Amstrad PC1512HD10 PC1512HD20 PC1512HD30 and PC1640HD20 PC1640HD30 hard disk drives. These old computers came with 10MB 20mb and 30mb Hard Drive, usually formatted in MS-DOS. They were sold by Schneider, Sinclair as the PC500 and in the USA as the PC6400. Old Amstrad PCs used a hard disk with the famous St506 interface so they needed a dedicated ISA controller card. KYOCERA KC 30B was a popular make of HD. The computers were also supplied with a floppy disk drive 5.25 inch.